10 Actresses We Bet You Couldn’t Recognize in Male Roles

18 Fathers Who Adore Their Kids So Much, They Can’t Hide It Anymore

Celebrities Showed Their Faces in a #Nomakeup Challenge, and We Admire Them for It

12 Not-So-Dull Notes About Paintings From an Art Expert

Viktoria is an art student and she has an entertaining Telegram channel called “Chtozakartina.” On this channel, she talks about famous paintings in a fascinating manner. She not only discusses the paintings of the Renaissance era, but also ones that were done by modern artists.

We at Bright Side took a dive into the world of art that became quite a bit more interesting thanks to the way Viktoria talks about it. 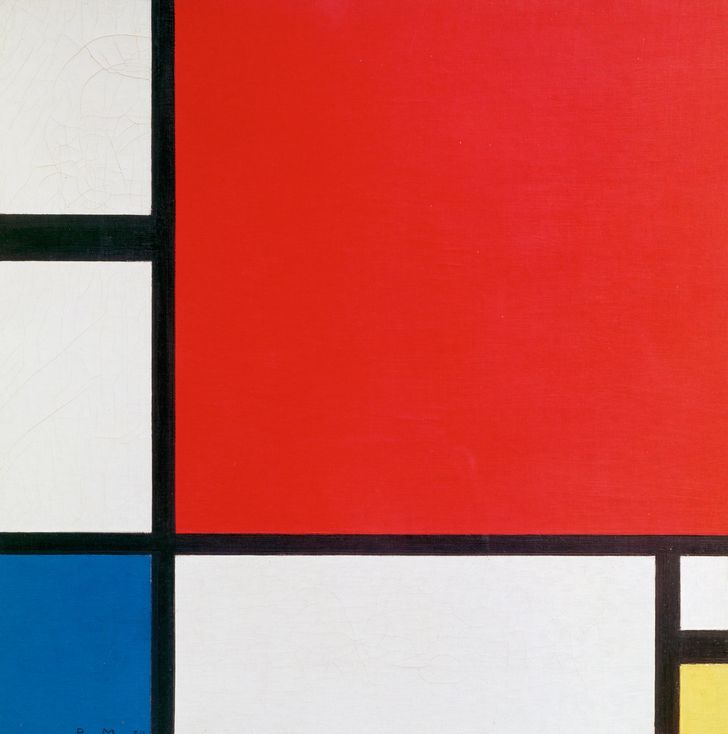 The strange desire of Mondrian to remove all the extra details from his paintings lead to the result that, at some point, there were only 3 colors and lines left. Why these colors, you might be wondering? It’s simple: they are the main colors in the palette. When you mix them in different proportions, you can get an infinite number of shades. And this painting became extremely popular in 1965 because Yves Saint-Laurent designed 6 dresses when he saw the inimitable and eternal style potential in this work of art. 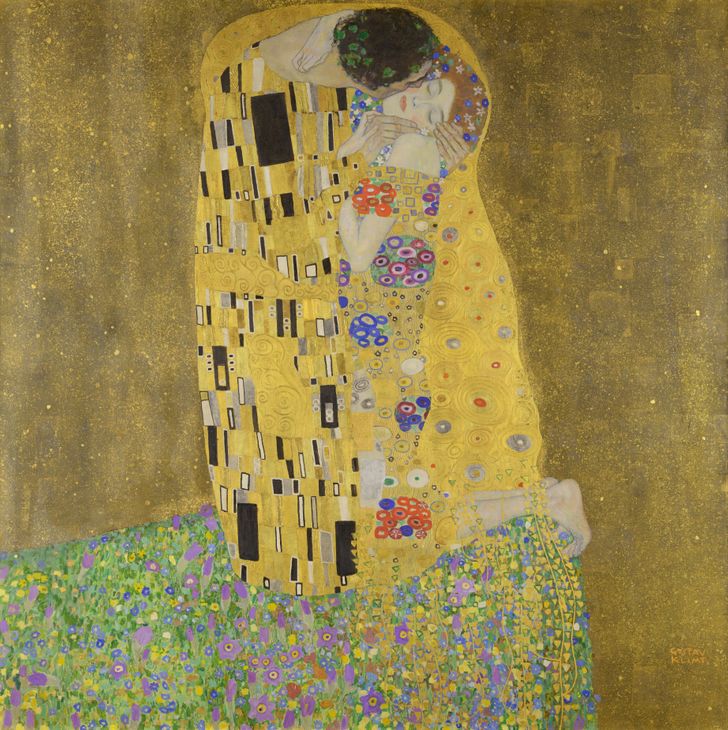 Everyone romanticizes this painting even though some suggest it really isn’t about romantic love. First, look at the hands of the lady and the way they’re trying to pull away the man’s hands. Second, the lady is in a kneeled pose which looks like she can’t say “no” in this situation. Do you agree with this? Nevertheless, the painting itself is absolutely stunning. This magical aura made of gold (which is actually real) and the references to Egyptian culture in 2D are just awesome.

You can see this masterpiece in the Österreichische Galerie Belvedere in Vienna.

Bouquet of Flowers in an Earthenware Vase, Jan Brueghel the Elder, 1606–1607 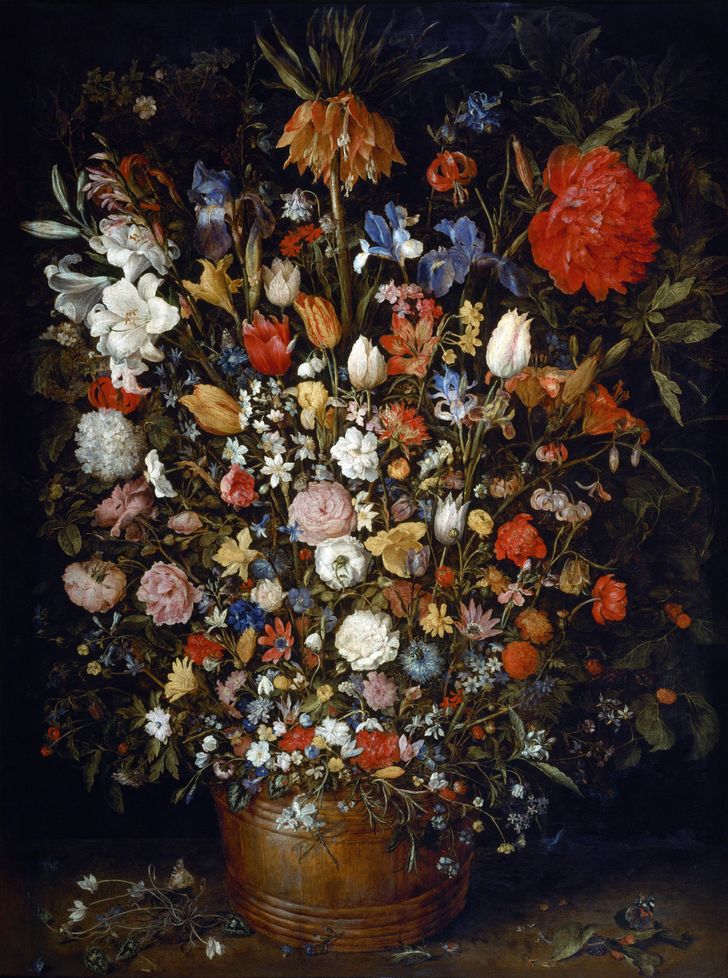 Just look at this stunning painting. This is a classic Dutch flower still life. The artist traveled a lot in order to draw rare flowers and this bouquet is actually not a real one, because the flowers you see in it grow at different times of the year. This is why it took Brueghel so long to create one painting — he wasn’t just fooling around.

You can see it in the Alte Pinakothek Museum in Munich. 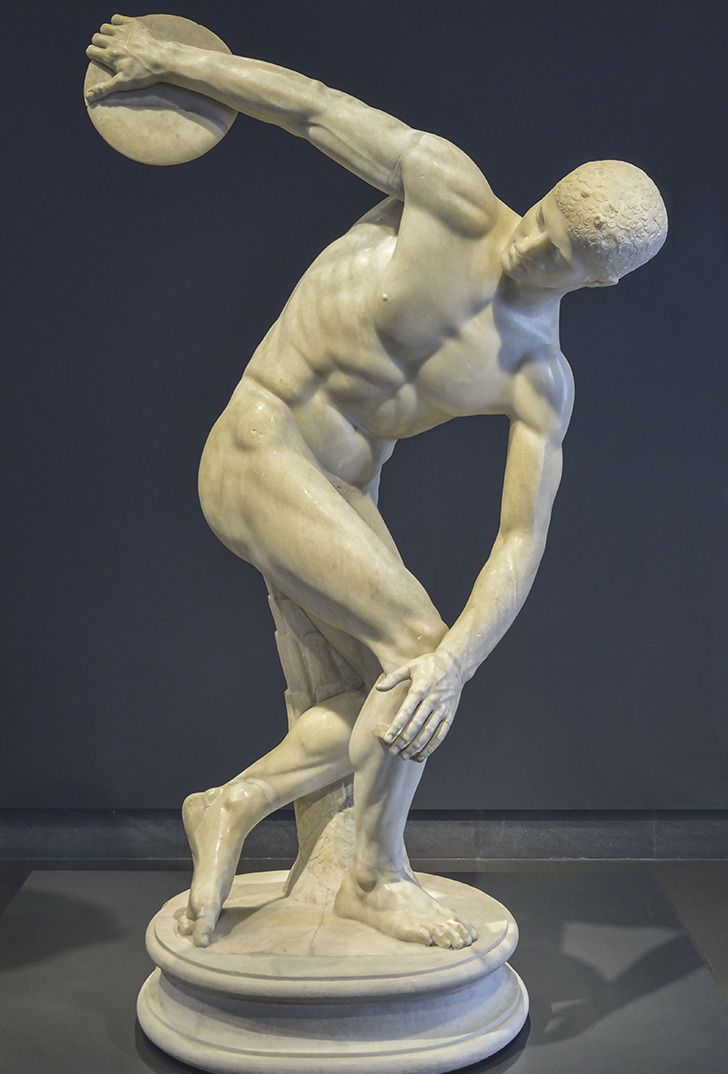 Everyone has probably seen this statue and you might think that this is a very famous athlete, but no. This is a generalized image that was purposefully deprived of any individuality. At the time, the personalities were not at the forefront, which can be seen in all of the art of Ancient Greece. Every sculptor was looking for their own universal formula.

By the way, the original statue which was made of bronze wasn’t preserved, unfortunately. So we only have the Roman copies made of marble. The best one is located in the Palazzo Massimo in Rome. 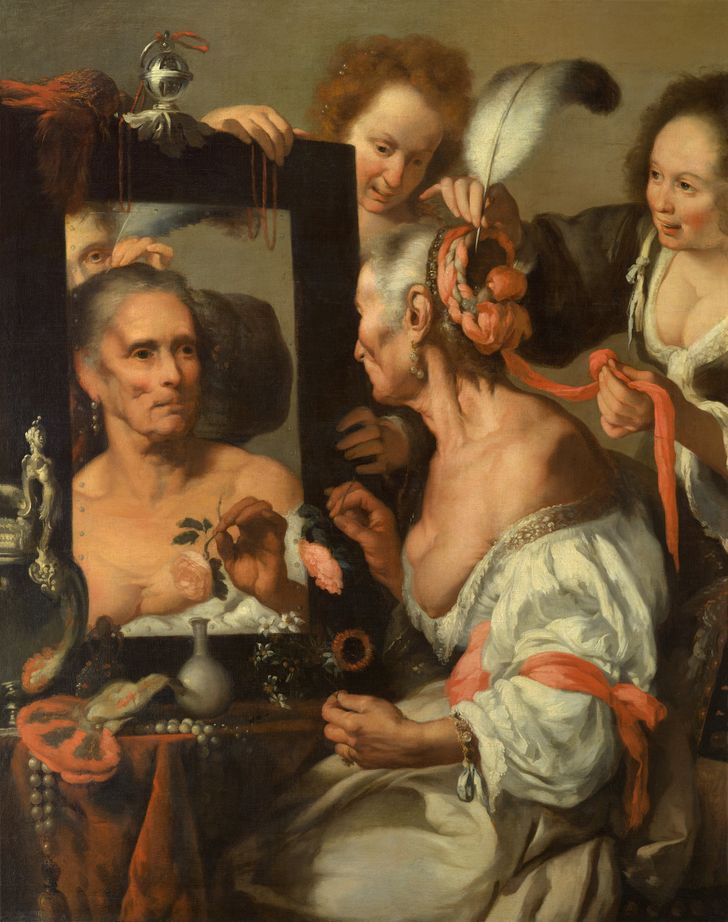 The main message of the painting is obvious: getting old sucks and trying to look young when you’re not, also sucks. This painting belongs to the genre of the Baroque vanitas. It’s about how fast life is and the fact that death is inevitable. So, let’s take a quick tour of the main symbols. In one hand, the lady is holding a rose. But in the other, she has a fleur d’orange bouquet — the traditional attribute of a bride. This is so ironic, it’s hard to believe it’s real! Also, there is a not-so-subtle reference to vanitas — a dead bird on the mirror.

You can think about life and see this painting in the Pushkin Museum, in Moscow. 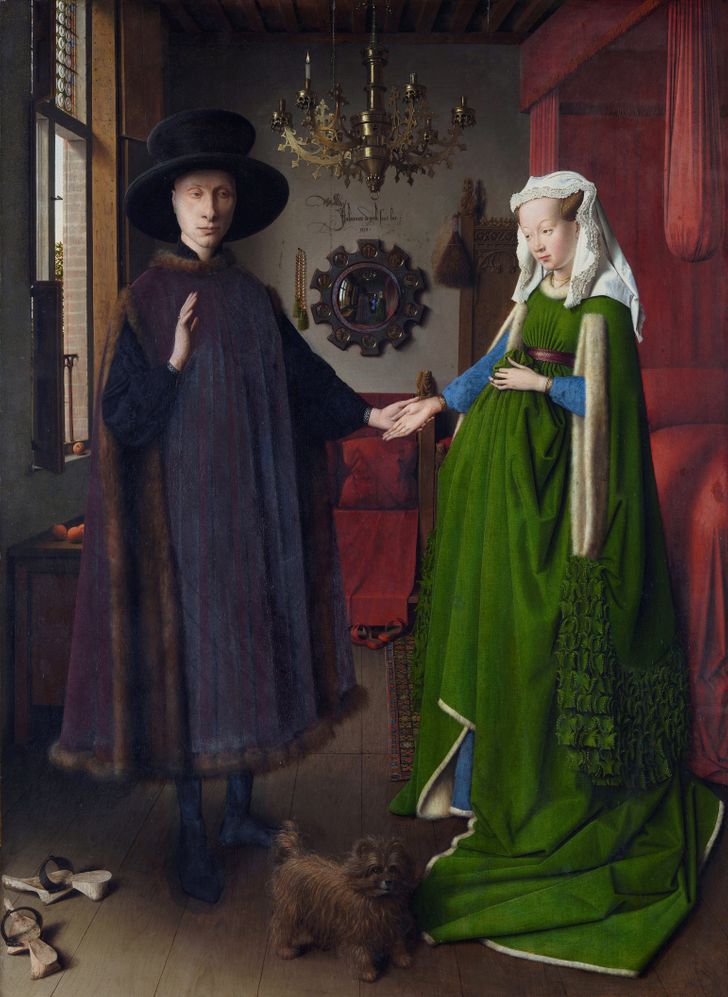 Have you heard about the era of the Northern Renaissance? It’s the same Renaissance, but in northern Europe, where he is from.

The painting shows a wedding. At the time, you could get married at home or in a church with 2 witnesses. If you’re wondering where the witnesses are, you should take a look in the mirror behind the couple. By the way, one of the people in the reflection is probably Jan van Eyck himself — a genius move. But the artist couldn’t help but leave another mark. A small caption above the mirror, that says something like Jan van Eyck was here. And how do you like the small dog? It is a symbol of loyalty.

This masterpiece is in the National Gallery in London. 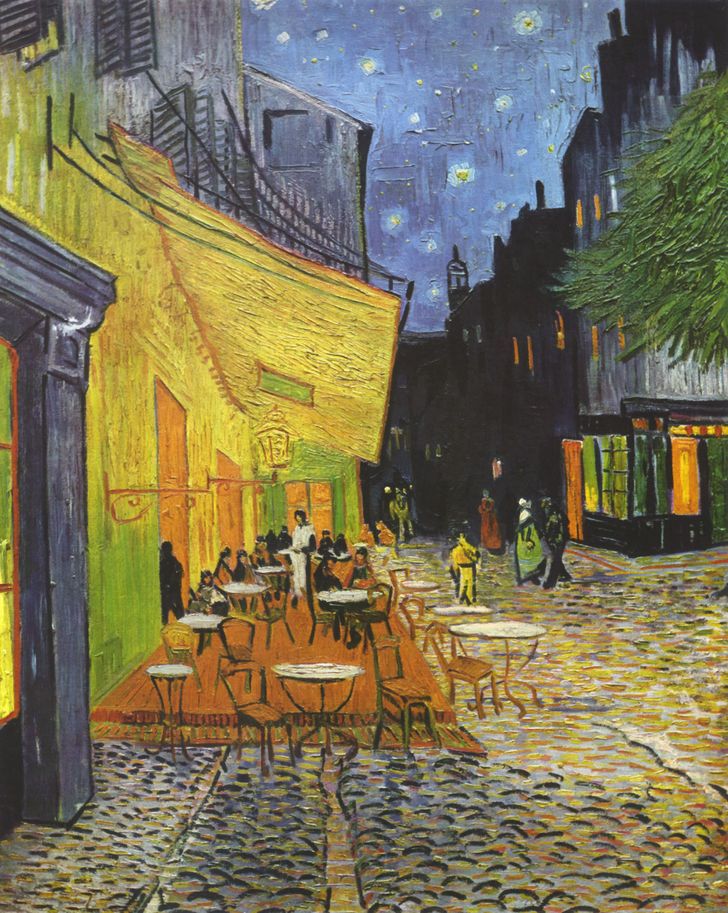 When you see a Vincent van Gogh painting, put on your “smart” face and say that it’s post-impressionism. This way, you will instantly be accepted into the art expert community.

This is a real place with a cafe in a French town called Arles, where the artist went not long before he died. And the best part is that around 100 years later, this place was restored and made to look like it does in the painting. You probably also noticed the starry night: this is what Vincent van Gogh is known for. By the way, from an astronomy standpoint, everything here is perfect. The artists that actually do their research are genius.

You can see the deep colors and this starry night in the Kröller-Müller Museum in the Netherlands. 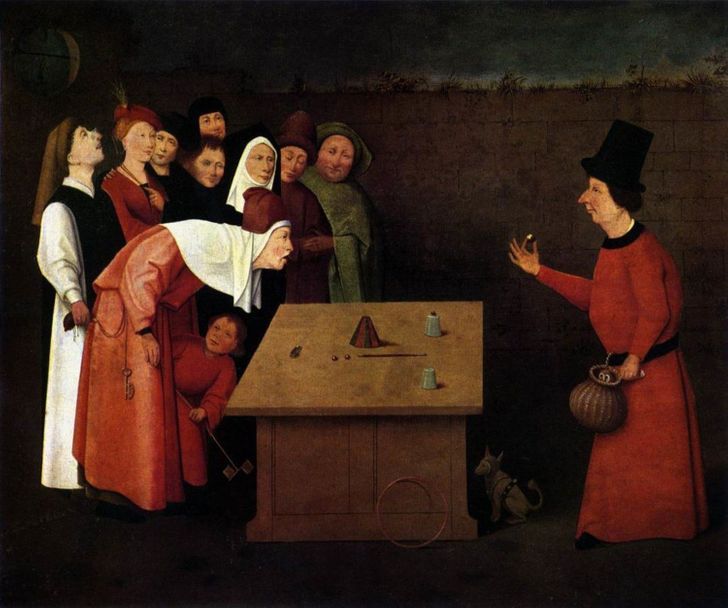 This is one of the earliest works of Bosch. He did it before he went into the Biblical stories and all the other well-known works that later made him famous. In this one, there are some weird-looking animals, a crowd of people who’ve stopped to take a look at the show, and, to their surprise, a magician is performing tricks.

The viewers have mixed feelings: some of them like what they see, some are frowning in disbelief. But look at the man standing behind everyone. He is definitely the magician’s accomplice: while the people are distracted by a very poor quality show, this guy is stealing someone’s wallet.

An exact copy of the painting is in the Municipal Museum in Saint-Germain-en-Laye, but the original painting was, unfortunately, lost. 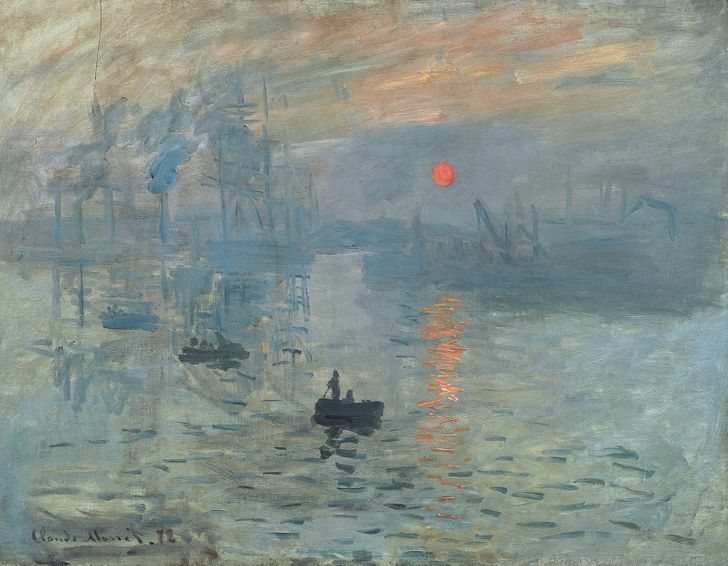 Here you can see an old port in the French town of Havre, the hometown of the artist. At first sight, it’s, well, 50 shades of grey, nothing special, but this painting changed the game. It is believed that this was the “Impression” that gave the name to the entire direction of art. Basically, it’s about giving up the academic way of painting, and choosing to picture the fleeting moment or reality. At first, a lot of people didn’t like the new style and they thought that being able to see Monet’s brushstrokes was terrible. But later, the artist had followers all around the world.

Actually, Monet did a series of paintings about the Havre port. This one is located in the Marmottan Monet Museum in Paris. 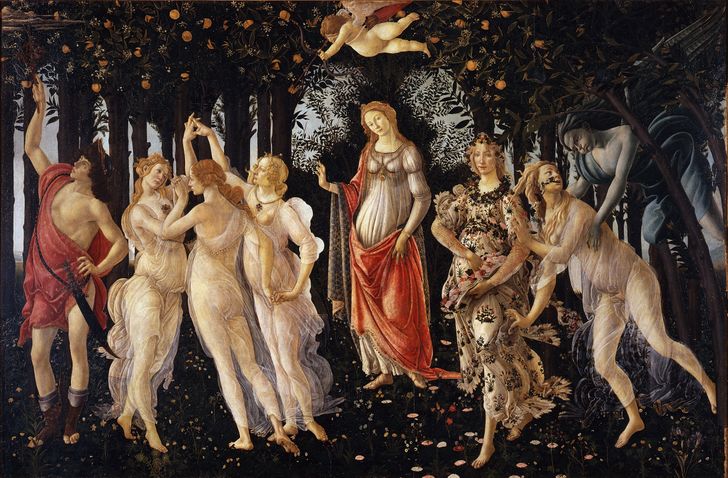 As you can see, this is the early Renaissance era: everything is very bright, people still look like people, but they are too attractive. Botticelli drew all 3 months of spring here just because he could. On the right, the god of wind, Zephyros, is taking the forest nymph Chloris somewhere where they will marry and she will become the goddess Flora. This is the impersonation of March, the unceremonious type. The central character is Venus. Ancient Romans celebrated her ascension in April, so the second month of spring is represented by her. And the final month is May: on the left, May is poking at something with a stick. He is shown as Mercury, the son of the goddess Maia. He uses a stick to make the clouds go away, because if there’s no sunlight, nothing will grow.

You can see this painting in the Uffizi Gallery in Florence. 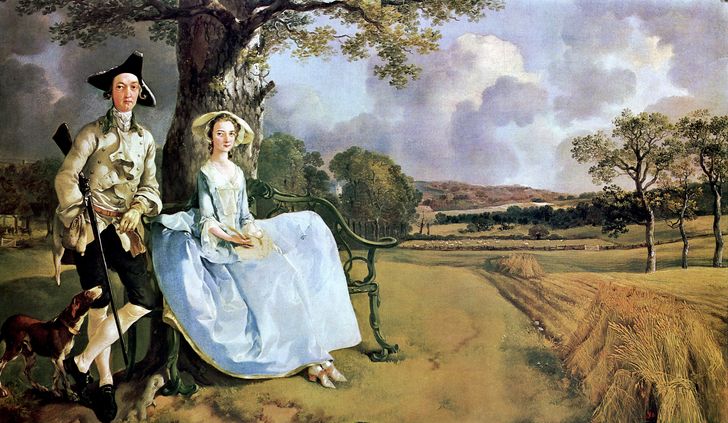 Gainsborough’s favorite genre was landscape painting but, unfortunately, it wasn’t very profitable, and it didn’t make him famous. His natural resourcefulness helped him. Aristocrats have always loved pompous rococo portraits. So, Gainsborough added his favorite rural areas into these portraits inventing a new genre that quickly became popular among wealthy people.

The people in the painting are looking at us and seem as if they are inviting us to have a little chat. There is no glamour of the classic French rococo. But details like the hunter’s suit, his rifle, and his wife’s big dress mean that these people are wealthy. In the background, you can see the meadow with sheep which are the dowry of Mrs. Andrews. And the oak behind the people is a symbol of the well-being of their dynasty.

You can see it at the London National Gallery. 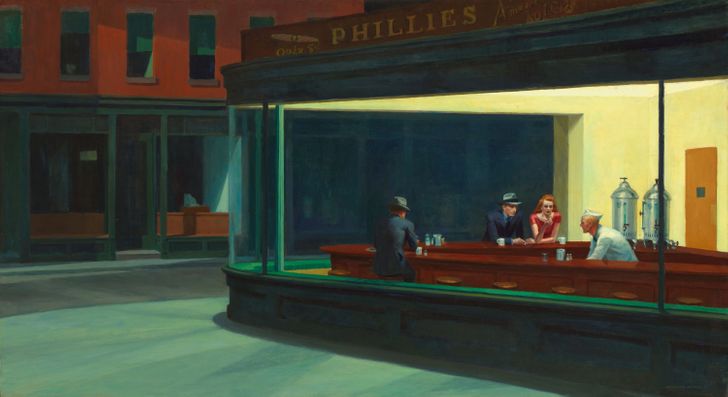 This artist masterfully creates tension, not only with the colors, but also using details you can’t see right away. You can see the cafe, the people, but you can’t enter the place because you can’t see the doors. It’s as if they are locked in there and we can only watch from the outside.

Maybe, you’ve read Ernest Hemingway’s story The Killers, where 2 people were waiting for their victim in a cafe. It seems that this painting is the perfect setting for this story. Also, it’s possible that this a scene from a movie that doesn’t exist. Just look at the framing — it looks like a movie shot. In fact, we know that Edward Hopper was a huge movie fan and when he wasn’t drawing, he was watching movies.

You can see this painting at the Art Institute of Chicago.

Which of these notes seems the most captivating to you? Maybe you also know something interesting about these famous paintings?